GUAYAQUIL, Ecuador - Ecuador's President Rafael Correa on Saturday rejected "rude threats" from the UK towards his country, referring to the possibility of the British police to enter the Ecuadorian embassy in London to stop the refugee Julian Assange, and branded them as "extremely serious" for the world. 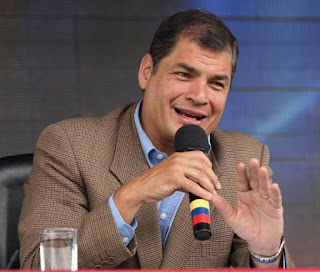 “What has happened is extremely serious not only for Ecuador but (…) for the entire planet”, declared the president  before the foreign ministers of the Bolivarian Alliance for the Americas (ALBA) who met in Guayaquil (southeast of Ecuador) on request of Quito in order to investigate the crisis with London concerning the decision of giving diplomatic asylum to the founder of wikiLeaks.

“We will not give up the effort nor the discussions in order to achieve the unanimous rejection and conviction of this unprecedented threat and possibility, because I insist, the United Kingdom has not retracted this threat and could enter our embassy, today, tomorrow”, he added.

Explaining the situation to the ALBA’s foreign ministers, Correa said: “Imagine the precedent, not only for our country but for them. Anyone could enter as well a British embassy anywhere in the world”.

The ALBA is a subregional alliance of countries formed at the request of the Venezuelan president Hugo Chávez and its fellow members are Cuba, Bolivia, Nicaragua, Dominica, Ecuador, Saint Vincent and the Grenadines, and Antigua and Barbuda.

Earlier, during his weekly work report presented in the city of Loja (south), the Head of State declared: “Never, at least as long as I’m president, this Ecuador will accept threats like those that have been presented in a completely rude, inconsiderate and intolerable way by Great Britain”.

Ecuador denounced the document it received from the British government in which they warned they could enter the premises of the Ecuadorian embassy in London to arrest Assange, who is wanted for extradition by Sweden for sexual assault charges that he denies having committed.

Correa insisted this Saturday, August 18, in the denunciation, although the British minister of International Relations, William Hague, rejected this version.

“There is no threat here to storm an embassy. We are talking about an Act of Parliament in this country which stresses that it must be used in full conformity with international law,” said Hague.

Assange fears that Sweden could subsequently extradite him to the United States, where he would be investigated for espionage due to the publication of hundreds of thousands of secret documents from the State Department, for which he states that he could be given death penalty.

The past 19th of June, the Australian has taken refuge in the Ecuadorian embassy in London and August 16 Ecuador granted him the diplomatic asylum.

Correa said that with “surprise” he received the written statement from London in which a direct quote is made that “according to a national law from 1987 (..) they could enter our embassy“.
“Did they believe they could intimidate or daunt us with that? They don’t know who they are dealing with!”, he exclaimed.

In this situation, Ecuador solicited support from the regional bodies like the ALBA, Unasur and OEA.
The foreign ministers of Unasur will also hold a meeting, today Sunday in Guayaquil, while the OEA will meet on august 24 in Washington.

The president of Ecuador recalled this Saturday that before granting asylum to Assange, his country exhausted “all the instances for a diplomatic solution” on the case.

Venezuela will leave the IACHR because it outrages against people's dignity

“The Inter-American Commission on Human Rights (IACHR) again outrages against Venezuela, the international law, and offends the dignity of a whole nation, the Venezuelan nation. “


That is how expresses the President of the Bolivarian Republic of Venezuela, Hugo Chávez, during his participation at the acts, in Puerto Cabello, on the occasion of the 189th Anniversary of the Battle of the Maracaibo Lake and the Bolivarian Navy Day. 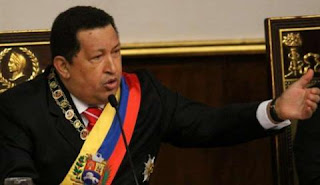 “We will get out of this court, because we have to do it, we have no other choice.
That is why I told Nicolás Maduro, we should not wait any longer, we should withdraw. Venezuela withdraws from the IACHR, out of dignity. And we accuse them before the world as being unworthy of carrying its name.”

The Venezuelan President refers to the decision of the IACHR of June 26 of 2012, released recently on July 20, that has been pronounced in favour of Raúl Díaz Peña and against the Venezuelan government.

Díaz Peña is the author of the terrorist attacks against the Consulate General of the Republic of Colombia and the Trade Office of the Kingdom of Spain, who has been sentenced on April 29 of 2008 on charges of public intimation, damage to public property and minor injuries, to nine years and four months in prison.


The Head of State gives to know his decision to denounce to the world that the IACHR decides in favour of a terrorist, who has been arrested and convicted with evidences. "The world must know, because acts like these delegitimize that ineffable court, a treaty that Venezuela is denouncing. We will get out of this court...".

Search inside the blog